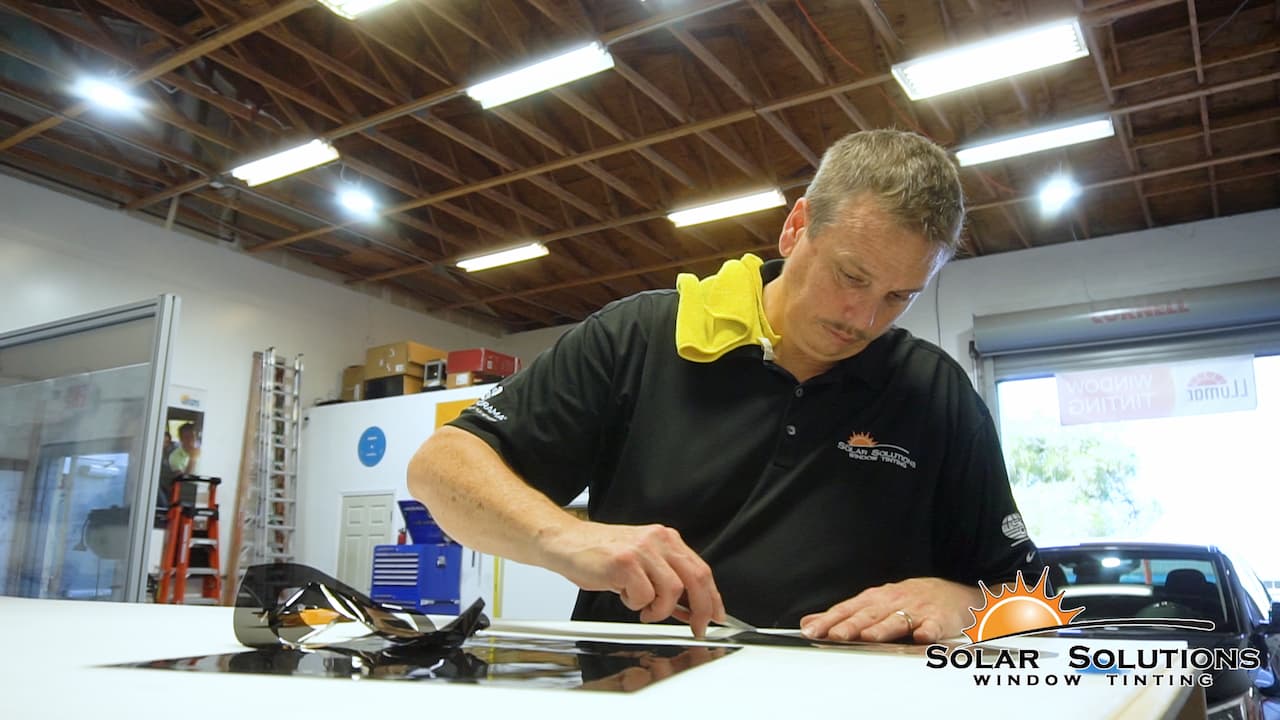 Sunroof tinting: Many people would like to have their car’s sunroof tinted, but they aren’t sure if it’s even possible. After all, a car’s sunroof isn’t quite the same as the other windows. Sunroofs have their own unique size and shape and are tempered glass. There’s a lot to consider for anyone who is thinking of having their sunroof tinted.  So, we created this short video showing you to answer some of your questions. Solar Solutions has been serving the people of Vero Beach, Fort Pierce, Sebastian, and Melbourne, FL for over 20 years with our professional window tinting services. We’re here to help you understand the tinting process and help you better understand what should and shouldn’t be done when it comes to tinting.

We get a lot of questions asking about sunroof tinting. Is that possible? Can we tint them? Yes, we do provide sunroof tinting services. There is a certain darkness level that I do like to do just because of precaution. I’ve read a lot about some recent breaking. They are tempered glass. But, basically what happens is as you’re stopping heat, you’re conducting more heat into the glass itself, which the glass itself gets hotter and can cause them to break. So we keep the darkness level down so that we don’t get so much absorption into that glass then theoretically, it should be safer.

I’ve never had one or experienced one that has broken, but I’ve read of quite a few and that’s across the line, whether it’s a Nissan, Mercedes, Toyota, BMW, it really doesn’t matter. They all break, it’s just specific to that car. There are different panels. So, some are one panel like this particular model which is just a single panel, small sunroof. Some are larger sunroofs, which can cause more problems.

Generally, what I like to do, again, is to stay with the lighter films, because darkness does not take out. A lot of people think that if we’re taking out heat, we’re going to make them darker. If you put a black t-shirt on and go outside, you’re not going to be cool. It doesn’t work that way. So it’s a construction material is how we’re going to stop the heat. If you’re after glare and you want to make them dark to get rid of the glare, that’s your responsibility. I don’t generally recommend that. But, if that’s your choice and what you’re after, I don’t know the warranty situation on that and whether the dealer is going to cover it after the window film has been installed like that and there’s a glass problem.

I have not experienced a single glass breakage as of yet, but I’ve read plenty about it. So, that’s just again up to the customer, we leave it up to you as to what you want to do with your particular vehicle. The window film that we generally use is going to take about 60% of the heat out with one of the ceramics and then we’re going to take 99% of the UVA UVB out and give you a little bit of protection without causing damage to the car with this particular shape.

Okay, so we just did a quick installation video just to kind of show you the process of what’s involved. Generally, when I’m doing these, as you could tell from the view, we don’t use a lot of water. I mean, obviously, I don’t want water all over your car, we take all the precautions to make sure that

everything’s kind of kept dry and the way it’s supposed to be done. Instead of having water all over the place. You can’t do it inside a vehicle. You got to be cautious of what you’re doing. You got to know what you’re doing. As you can see from the video, just a little bit of graduate light difference. Again, we’re going to take a bunch of heat out with just a single panel here. To keep the customer a little bit cooler right in here. Even though you can draw the shades and keep the shades close. It’s still letting heat into the car that’s kind of dissipating around everything. So, it is an advantage.